The changeable weather in Greenland varies between regions and with a unique climate offering great differences in temperature over the seasons.

The Weather In Greenland

Greenland has an Arctic climate with average temperatures that do not exceed 10° C (50° F) in the warmest summer months. The air quality in Greenland is among the best in the world due to the country’s geographical position to the high north.

In the southern part of the country and the innermost parts of the long fjords, the temperature can, however, rise to more than 20° C (68° F) in June, July or August, and due to the fine air quality and low levels of moisture in the air, in general you are able to see very, very far.

The sea around Greenland affects the climate on land. The stretches of coastline close to the open sea, in particular, are cooled by the sea.

Therefore during the summer months it is warmest and driest on land closest to the ice sheet. In all parts of the country the weather is locally changeable and can vary from fjord to fjord and from one valley to the next.

You can get the best weather information by enquiring at local tourist offices or asking local people.

The air is generally very dry in Greenland in relation to many other countries, and because of this low humidity the low temperatures do not feel as cold as you might expect. On the other hand, the dry air means that you must drink more water than normal.

The low humidity also means that you can see further than you are probably used to. Mountain crests that appear to be close are usually further away than you think so keep this in mind when planning a hike.

"The air quality in Greenland is among the best in the world..."

Temperatures vary enormously: From an average in Upernavik of minus 20 degrees in February to about 10 degrees in the towns throughout the summer.

The temperature in Greenland is highly dependent on where you are and which time of the year you visit the country. The mean temperature remains below +10° C (50° F) in June, July and August in just about every town in Greenland, whilst all places are below freezing from November through to April.

Owing to the low humidity in Greenland, summer temperatures will often feel warmer than you might otherwise expect. If the sun is shining, short-sleeved shirts and T-shirts are perfectly adequate.
Conversely, the winter is particularly cold in the very north of Greenland, for example in Upernavik, where the thermometer shows an average of -20° C (-4° F) in February. 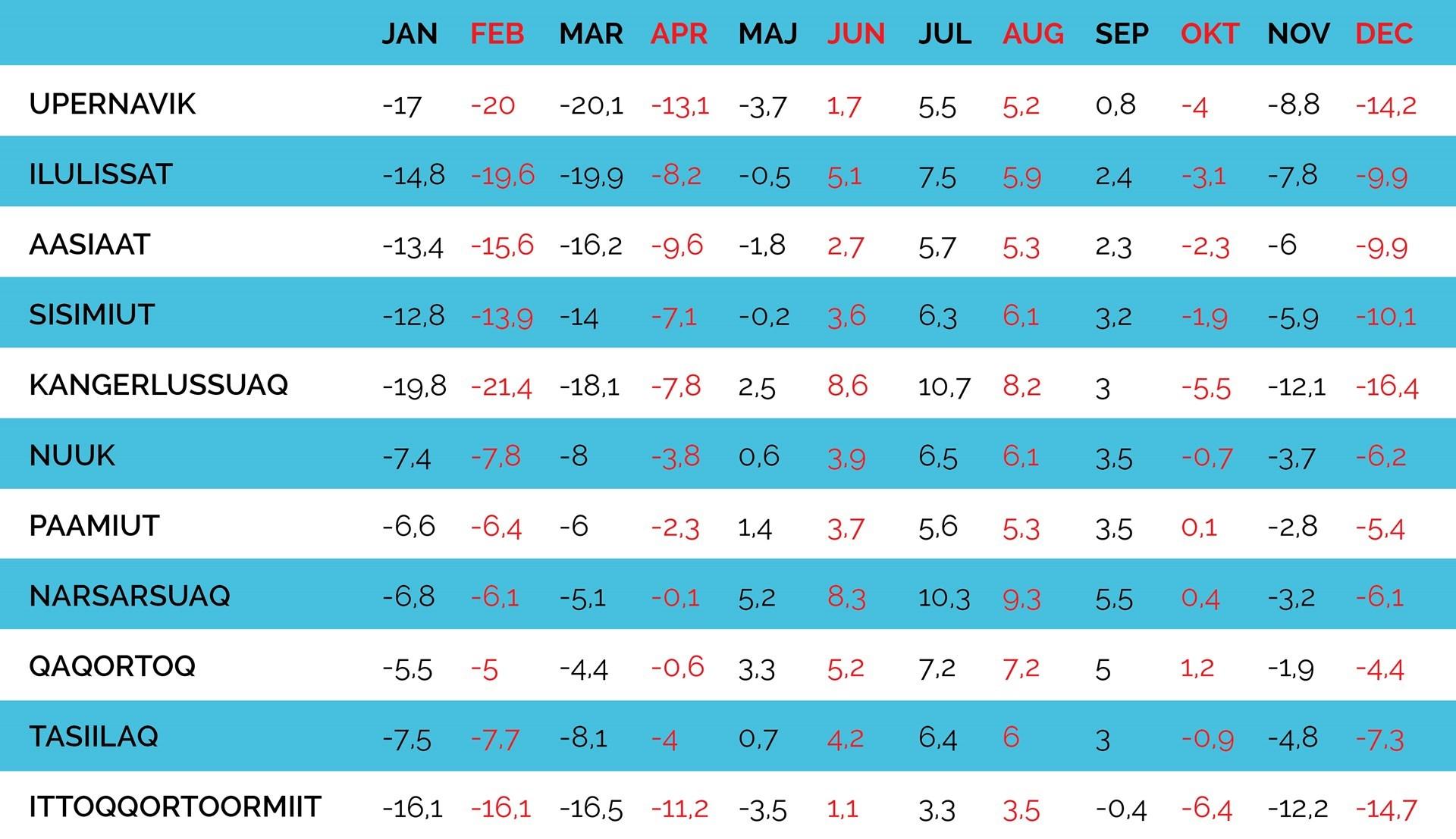 At the same time, there can be large fluctuations from day to day; for example in the summer months there are several places in Greenland where day temperatures can exceed 20° C (68° F).

Greenland’s climate is an Arctic one and offers large variations in temperature and rainfall. The weather can change suddenly and vary greatly over short distances.

THE WIND IN GREENLAND

Generally-speaking it is not that windy in Greenland. Many days are completely calm with calm seas and glassy fjords and lakes.

However, the wind can certainly pick up and when at its worst certain areas can experience so-called föhn winds, which are often preceded by lens-shaped clouds.

Föhn winds are usually warm winds from the southeast which can be very strong with gusts of more than 50 m/s (111 mph), and are usually followed by precipitation.

All in all, however, it is unusual for strong winds to be a problem for guests that are visiting Greenland during the summer or for brief periods only.

This is what is known as the chill factor or wind chill factor. Although minus 15° C (5° F) sounds cold, it does not have to feel it, as long as there is no wind and you are wearing the right clothing.

Suitable clothing is in fact the key, because it is a truism that there is no such thing as bad weather, just the wrong clothing!

In fact there is less rainfall in Northeast Greenland than in the Sahara, and thus the expression “the Arctic desert” has arisen.

RAIN AND QUANTITIES OF SNOW

Quantities of snow also vary locally, but it is not unusual to see large amounts of snow in many towns from December to March.

Enquire in advance at your local travel agency if you are planning to go skiing or dog sledding. The best months for dogsled driving are from February to April.