Mexican photographer bonds with locals while cruising with Sarfaq Ittuk.

PASSIONATE BY NATURE, ADVENTUROUS BY HEART

I’m Marcela Cardenas, a Mexican polar-nature photographer based in Norway. I’m incredibly attracted to blue ice in glaciers and icebergs, so for years I dreamt about exploring Greenland. In January 2015 I moved to Greenland for a year-long adventure!

Ilulissat is a town situated by the UNESCO Ilulissat Icefjord, packed with majestic icebergs, hundreds of sled dogs and the most colorful houses I’ve ever seen. This was my first stop in Greenland, and I spent eight months enjoying the landscape and getting to know the locals. In particular, two families became ‘my family’ and network for the rest of Greenland.

There is a reason why this city means ‘icebergs’, there are plenty of them! Sailing among the icebergs was so surreal. It was so peaceful and breathtaking. Sometimes we turned off the motor to be in total silence, then it was just the relaxing sound of the ice popping and cracking. It was the perfect moment to spot a whale or a seal, which added extra excitement.

After eight months living in Ilulissat, I boarded the coastal ferry Sarfaq Ittuk, and slowly began my adventure down south. I used the ship for transportation, getting off the ship and staying in almost every town for a week, before hopping on board again. It was October, so I met almost no other tourists.

However, because I boarded Sarfaq Ittuk several times, and it is the local way of getting around, I was able to catch up with new friends that I had made in other towns and villages that I just came from. It was exciting to see them again.

At every destination, I lived with locals, as my Ilulissat family helped me to find a relative or friend that I could stay with. All of them were wonderful hosts and we had a great time together!

"There is a reason why this city means ‘icebergs’, there are plenty of them!"

The most valuable thing for me was getting to know the local people and their fascinating culture. Greenlanders are the most hospitable, friendly, smiley, helpful, and humble people that I’ve ever met. I have traveled to 54 countries around the world, but I have never felt so welcomed in any other place before.

The people invited me to their homes for dinner to share their “catch of the day” like seal, fish, reindeer, muskox, and whale. They’re very family oriented, caring, relaxed and easygoing.

One woman showed me her Greenlandic national costume, and she asked me if I wanted to try it on. I gladly accepted and got the honor of wearing this beautiful dress. She asked her daughter to wear her costume too for the photo. This was a symbol that she not only opened her home to me, but also opened her heart.

I went without plans, like an adventure, with no budgets and no expectations, yet during my stay in Greenland I visited a total of 25 towns or settlements around the country.

My photos are the concrete outcome, and they portray the essence of my year of adventure. I hope you enjoy them!

Each Greenlandic place has its own charm, but my favourite places are:

All of these destinations can be reached by Sarfaq Ittuk, which sails from Ilulissat to Qaqortoq. 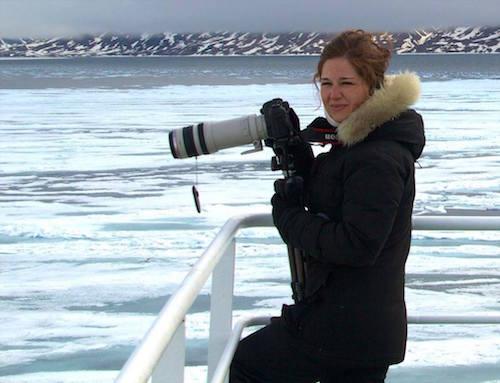 I am Marcela Cardenas, a Mexican polar-nature photographer based in Norway. I'm incredibly attracted to blue ice in glaciers and icebergs, so for years I dreamt about exploring Greenland. In January 2015 I moved to Greenland for a year-long adventure!